What kind of society is the Czech Republic for immigrants?

How good a destination for immigrants is the Czech Republic? How does the country fare globally and on an EU level in terms of its immigration, integration and citizenship policies, access to rights and opportunities, and popular attitudes towards immigrants?

Central Europe is not known to be the friendliest of places for immigrants. For years, countries in the region consistently show the highest opposition to immigration in opinion polls such as European Social Survey (ESS), Gallup and Eurostat. The issue of immigration and asylum, despite the low numbers of foreign-born population in these countries, has been a subject of controversy much abused by political elites. Political parties with openly xenophobic positions are not only popular with the electorate, but in many cases occupy the government seats. Such is the example with Viktor Orbán’s Fidesz in Hungary, Janez Janša’s SDP in Slovenia, and PiS in Poland. Increasingly illiberal regimes have been gaining strength in the region, in line with global trends of right-wing populism gaining in popularity.

To a varying degree, the Czech Republic is no exception to the trend towards nationalist populism and the anti-immigrant stance that inevitably follows. Yet, in terms of its treatment of non-citizens, Czech Republic does differ both from its neighboring countries and from North-Western Europe. We gathered statistics from several respectable sources to draw a more detailed picture about the kind of receiving society Czech Republic is, both for prospective and existing immigrants.

Who migrates to the Czech Republic?

The Czech Republic is not what we would normally call an immigration country, but the share of foreign-born individuals has been gradually rising, from 2 per cent of the total population in 2004 to around 5 per cent in 2019, which is roughly around half a million long-term foreign residents (Czech Statistical Office 2021).

The number of asylum seekers has been notoriously low due to the Visegrad countries jointly refusing to participate in the EU refugee resettlement scheme: there are no more than 2,500 persons with granted asylum, as per 2019. Since the onset of the “refugee crisis” in 2015, the Czech Republic has granted asylum to only 356 individuals (Czech Statistical Office). Considering how low this number is compared to other EU countries, it is no surprise that the rejection rate is rampant: of the small number of asylum claims made during 2019 (960), 91 per cent were rejected (Eurostat 2021). 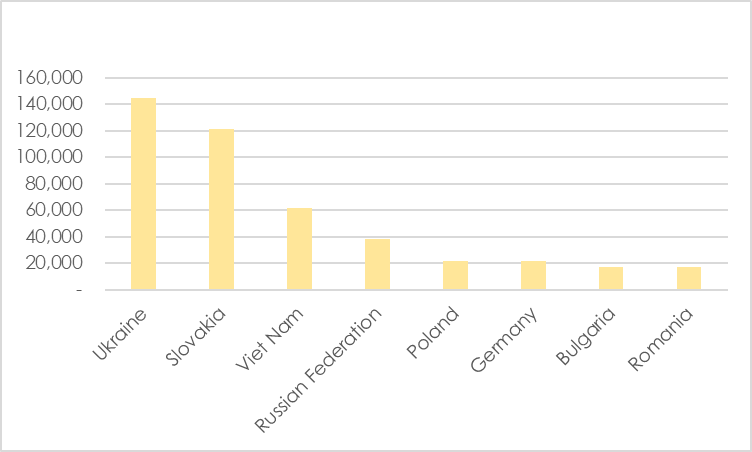 Around a third of non-EU citizens came here to join family members, with employment being the second reason for people migrating to the country. Less than five per cent of foreigners were on student visas (Eurostat 2021). The largest foreign-born group by citizenship is Ukraine, followed by Slovakia and Vietnam.

What opportunities for migrants to be equal members of society?

To get a picture of what kind of reception migrants can expect in the Czech Republic, we may start by looking into tools that researchers have developed for this purpose. One such tool, the Migrant Integration Policy Index (MIPEX), which measures policies to integrate migrants in 52 countries, can shed some light on what the Czech government is doing to provide opportunities for migrants to participate in Czech society. The index measures policy indicators in eight different policy areas, ranging from participation in the labour, education, political and health systems, to access to permanent residence and citizenship, as well as protection from discrimination.

On the global MIPEX score, Czech Republic fares similarly to countries as diverse as Korea, Estonia and Turkey. While it fares worse than some of its counterparts in Western Europe, Czech Republic has the highest score among the Visegrad countries and ranks relatively high globally, in the top 25. With a score of 50 out of 100, Czechia stands at EU’s average. An area where improvements have been made in recent years are education and health, where the Czech Republic leads ahead of the rest of the region. Diversity teacher training, interpretation services at hospitals and language support to immigrant children are all cited as positive changes in recent years (MIPEX 2020). Non-citizens can also count on relatively effective mechanisms for protection from discrimination.

On the other hand, as all Central European countries, Czech Republic scores notoriously low for opportunities for political participation of foreign citizens. Perhaps the most problematic point with the highest impact on immigrants’ security is the difficult access to citizenship and long-term settlement, as well as increasingly restricting policies for entry. Although it is the best ranked country in Central Europe in the overall score, it is on the bottom when it comes to access to permanent residence. Citizenship is hard to acquire too: only 0.5 per cent of all foreign citizens residing in the Czech Republic were granted citizenship in 2019; for comparison, the naturalization rate in Sweden was nearly 7 per cent (Eurostat 2021).

The policy for entry into the country (not measured by MIPEX) is another area where, under pressure by negative public opinion and the right-wing populist wave in recent years, the government has been attempting to restrict the pathways to a legal stay in the country, notably for low-skilled workers. New immigration rules adopted in 2013 significantly restricted access to rights for some categories of migrants. For example, migrants who want to bring their families to the country face a significant obstacle – one of the most severe in Europe – due to the length of stay condition: family members can only join them after the applicant has spent 18 months in the Czech Republic on a valid residence permit. The inability to relocate immediately with one’s family surely is a significant deterrent for many prospective migrants. Aware of the negative consequences from this measure for the recruitment of “desirable” international employees, the government exempts certain high-skilled migrants (for example, academic staff) from this barrier, allowing them to bring their family immediately. However, perhaps because it means unfair treatment of some groups of immigrants, this information is concealed from the official websites and is only communicated to privileged applicants at the application stage. 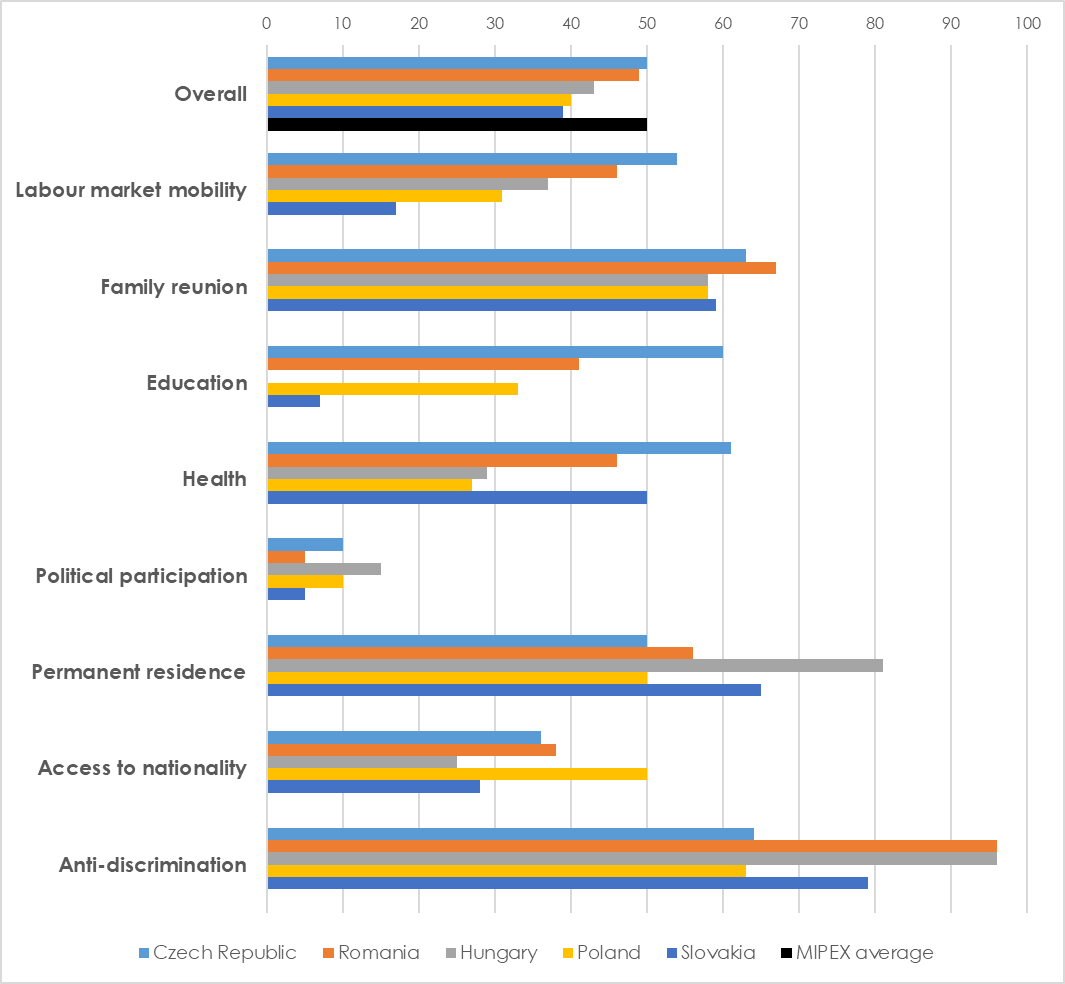 Are immigrants accepted by the local population?

One of the main reasons why a positive environment for immigrants matters is not only because it directly affects the wellbeing of immigrants, but because in countries whose governments take a proactive approach towards inclusion of non-citizens, the population at large also seems to have more positive attitudes and less prejudice of foreigners. Countries with higher MIPEX score also have more positive attitudes towards immigrants, as measured through Gallup’s Migrant Acceptance Index (World Happiness Report 2018).

Sadly, Czech Republic is among the bottom 10 countries in the world when it comes to acceptance of immigrants, evident in the graphic below. The Migrant Acceptance Index is composed of three different indicators. Participants in the survey were asked whether it is a good or a bad thing if immigrants live in their country, if an immigrant becomes their neighbor, and if an immigrant marries someone from their family. While traditional immigration countries such as Anglophone settler societies (Canada, USA, Australia) and countries in Sub-Saharan Africa were most open to immigrants, ex-communist countries, including Czech Republic, Hungary, Macedonia and Serbia expressed the most hostile sentiments towards immigrants. 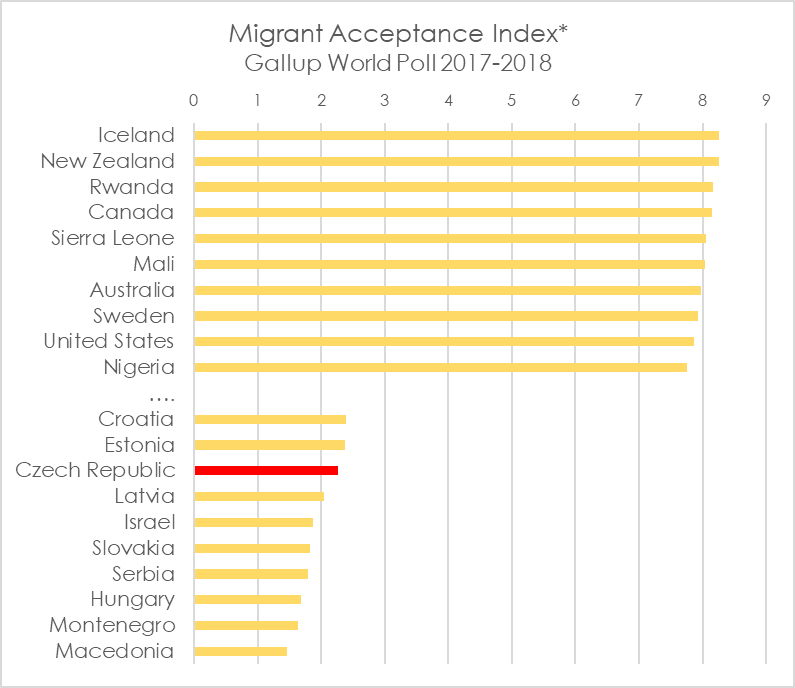 The degree to which the local population is tolerant of non-citizens seems to affect the psychological wellbeing of the latter: immigrants (especially those who have spent longer period in the country) who live in countries with higher acceptance reported significantly higher levels of happiness compared to immigrants in low-acceptance countries (World Happiness Report 2018). And while the negative attitudes towards immigrants seem to be widespread in the Czech Republic, this doesn’t necessarily mean that Czechs think immigration to the country is a salient issue: only 9 per cent thought it was one of the most important problems in the country (Eurobarometer 2020). 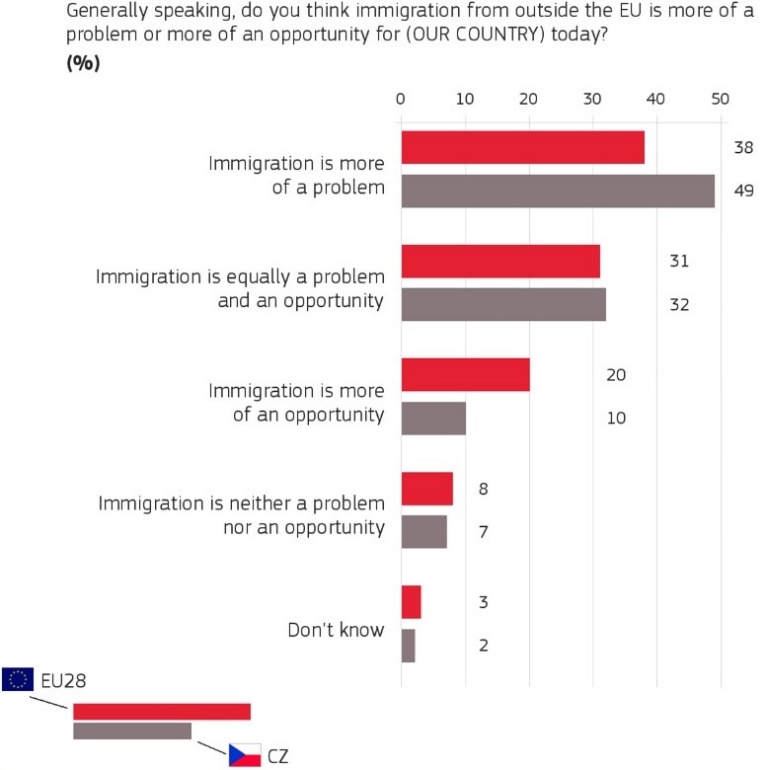 In a survey conducted in 2017, only one quarter of respondents said they had friends or family who are immigrants (from outside the EU) living in their country (Eurobarometer 2017). Nearly half of the respondents thought immigration is more a problem than an opportunity, a proportion significantly higher than the EU average. The majority of Czechs think that immigrants are a burden to the welfare system (65%), increase the level of crime (71%) and take jobs away from Czechs (53%). And while half of the respondents thought that integration is a two-way process where both immigrants and society bear responsibilities, two thirds were satisfied with what the government was doing to foster integration.

It’s important to outline that both the survey questionnaire and, arguably, the popular imagination, define “immigrants” as non-EU foreign-born people. Many of the EU citizens who have decided to settle in the Czech Republic will find a pleasant and welcoming environment in a fast-growing economy with a high quality of life that remains affordable. However, people from outside the EU, notably those who are physically distinguishable from the white local population, will encounter more barriers, not only with respect to prejudice and discrimination, but especially legal barriers for entry and settlement. In this respect, the Czech Republic is not very different from the rest of the EU, where culturalist concerns, racism and anti-Muslim bigotry drive both public opinion and the increasing restrictiveness of immigration policies.

is a Marie Curie fellow in the European Joint Doctorate MOVES (Migration and Modernity: Historical and Cultural Challenges). She is based at Paul Valery 3 University in Montpellier, France and Charles University in Prague. Her doctoral research examines discourses on immigrant integration to understand how “integration” is imagined by various social actors.