Borders – both tangible and intangible – are inherently divisive. The very idea of a border implies a need for boundary-keeping, for determining who or what belongs – or indeed doesn’t belong -  both within and beyond that border’s limits. The borders of the nation-state, even in this era of globalisation, tend to be the primary units by which we measure belonging in global society.

In the nationalist imagination, however, migrants are rarely determined to belong. Across national contexts, migrants have not only been overwhelmingly perceived as ‘Others’, but also social, economic, political, security or even existential threats to the supposedly homogenous national ‘Self’.

In Europe, where many nation-states have constructed identities in opposition to an imagined Eastern and Muslim ‘Other’, this ‘Othering’ of migrants often conflates with anti-Muslim sentiment. Consequently, it is often Muslim migrants who are forced to bear the brunt of anti-migrant sentiment and exclusion across Europe.

Although both European-born Muslims and Muslim migrants have long resided in Europe, much political rhetoric emerging in recent years has attempted to suggest otherwise, framing their presence as a newly – and supposedly much too rapidly - emerging phenomenon. Centuries-old myths that have cast Islam as a threat to Europe from its margins have thus now transformed into myths of Islam as a new - and apparently much more alarming - threat to Europe from within its own borders.

Within this frame of thinking, Czechia does not seem to constitute an anomaly. In the Czech nationalist imagination, neither migrants nor Muslims have been determined to belong. Anti-migrant and anti-Muslim sentiment both run rampant in Czech society - at some of the highest rates in Europe, in fact – and much public discourse in recent years has painted both migrants and Muslims as existential threats to Czech norms, traditions and values.

On an individual level as well, polls persistently demonstrate that the majority of Czech citizens feel a strong sense of hostility and distrust towards either migrants, Muslims or both. Nevertheless, white, Western and/or Christian migrants - especially those from countries with long-established economic links to Czechia such as Slovakia, Ukraine, and Russia – tend to be less discriminated against than do non-white, Eastern and/or Muslim migrants. Moreover, non-Czech speaking migrants in the country tend to face higher levels of discrimination than do Czech-speaking migrants, and migrants who are citizens of other EU member states are in some cases not even recognised as migrants at all.

Where Czechia does seem to constitute an anomaly, however, is in the origins of its exclusionary attitudes towards migrants and Muslims. Throughout history, groups that have been markedly excluded from imaginations of a certain national belonging tend to have also made a significant impact on the history of the nation(s) from which they have been denied belonging. However, compared to the histories of other European nations, neither migrants nor Muslims seem to have made a significant impact on Czech national history.

In fact, rather than being a destination for migrants, Czech lands have traditionally been a source of refugees fleeing political, economic and security threats. Between the 1960s and 1980s, hundreds of thousands of Czechs fleeing the Czechoslovak Communist regime, one of the most authoritarian, brutal, and isolationist in the entire history of the Soviet Bloc, were granted asylum in countries such as Germany, the United States, Canada and Australia.

Migration into Czechia, on the other hand, is a relatively recent phenomenon. After both the 1989 Velvet Revolution - which marked the collapse of the Czechoslovak Communist regime - and Czechia’s 1993 breakup with Slovakia, the Czech government began to implement a series of major social, economic and political reforms. Denoting their quick success, Czechia was accepted as an EU member state in 2004, and also declared to be a developed country by the World Bank in 2006.

Only after its transition from a communist to democratic and free-market society did Czechia begin to attract higher numbers of migrants. However, a significant portion of these migrants arrived in Czechia for the purposes of work, study or family reunification - often from other former communist states - and have made invaluable contributions to the expansion of the Czech economy, contrary to popular myths about migrants. Moreover, as of 2020, migrants only comprised an estimated 5% of the country’s population.

In terms of contact with the Islamic world, this has also been significantly absent in Czech national history. Unlike other European populations that were ruled by the Ottoman Empire, such as those in the Balkans or on the Iberian Peninsula, the Czech population was only marginally affected by the Ottoman wars with Europe between the 13th and 20th centuries. Although Czech lands became part of the Habsburg Empire in 1526, and were thereby part of an empire which hailed itself as a bastion of Christianity against Islam, the Czech population was never ruled by the Ottomans, nor did it ever come into direct contact with the Ottoman army.

In fact, the first Muslim migrants to Czech lands did not arrive until after the turn of the 20th century due to Austria-Hungary’s annexation of Bosnia and Herzegovina in 1908. Although Muslims continued to migrate to Czech lands after the creation of Czechoslovakia in 1918, when the first Muslim community organisation in the region was founded in 1934, it only had an estimated 700 members. Moreover, the first mosque in Czechia was not constructed until the summer of 1998, and today there are only three mosques in Czechia shared by a tiny minority of Muslim residents - less than 0.2% of the population - with limited rights and privileges.

From a certain perspective, the fact that neither migrants nor Muslims have made a significant imprint on Czech national history renders high levels of discrimination against these groups in Czech society relatively surprising. As collective memories of oppression, suffering and displacement constitute major sources of cultural trauma in the Czech national psyche, one might have expected Czech society to be more open than others to receiving refugees seeking asylum in Europe today, many of whom have undergone similar experiences of trauma.

Furthermore, Czech society is one of the most atheist worldwide, second only to Chinese and Japanese societies, and only an estimated 20% of the Czech population practices any religion at all. Combined with the fact that Czechia’s Muslim minority is barely visible, one might have also expected to see lower rates of religious discrimination - as well as preferences for Christianity over Islam - in Czech society than are typically exhibited in more religious societies across Europe.

Nevertheless, at the peak of Europe’s supposed ‘refugee crisis’ between 2015 and 2016, Czechia emerged as one of the most opposed nation-states in Europe to settling refugees - especially those of Muslim origin -  within its borders. During this time, fearmongering about migrants and Muslims dominated both traditional and social media headlines, portraying migration as a security issue rather than a humanitarian one.

Czech political parties from across the political spectrum also tirelessly created, perpetuated and exploited myths about migrants and Muslims in Europe - such as those of an impending Islamic invasion or an emergent Muslim majority - for political gain, exacerbating the already-existing spread of populism and far-right conservatism across Europe. Once rarities in Czech public discourse, the topics of migration and Islam were thus transformed into some of the most explosive, sensational and polarising issues of recent Czech history.

The rapid circulation of dehumanising rhetoric towards migrants and Muslims in the public sphere not only had a significant impact on Czech popular opinion, but also triggered a rise in hate speech, protests, demonstrations, complaints, acts of vandalism and even physical attacks targeting migrants and Muslims:

In one instance in August 2016, an anti-Muslim hate group staged a fake ISIS invasion, which included the performance of a mock beheading, in the middle of Prague’s bustling Old Town Square: 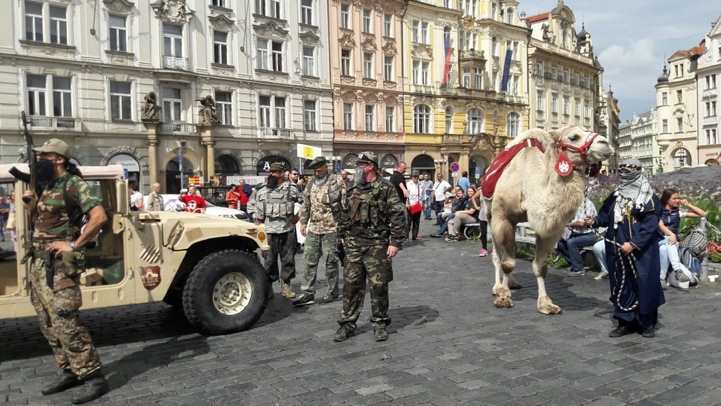 The following month, dressed in traditional Muslim garbs and gathered outside the Embassy of Saudi Arabia in Prague, the same group unabashedly mocked the Islamic Hajj Pilgrimage by marching around a portable toilet meant to resemble the Holy Kaaba in Mecca. Earlier in 2016, the group had also set fire to a copy of the Quran in front of a vandalised mosque in Brno.

Yet compared to the impact of the so-called ‘refugee crisis’ elsewhere in Europe, Czechia was actually left relatively untouched. In reality, Czechia has never been a significant transit nor destination country for migrants seeking asylum in Europe. Moreover, the Czech government -  along with those of other Visegrád countries –refused to participate in the EU refugee resettlement scheme, framing it as an administrative burden, an assault on Czech national sovereignty, and an immense security threat. Only 3,003 applications for asylum were thus filed in Czechia between 2015 and 2016, only 219 of which were approved - at an estimated rate of just 7% - by the Czech authorities.

The lack of significant impact that migrants and Muslims have had not only on Czechia’s more distant past, but also on its more recent past, rendered rampant anti-migrant and anti-Muslim sentiment in Czech society not only seemingly paradoxical, but also somewhat of a puzzle. The perception of Czechia as an anomaly has garnered widespread attention, and many scholars have in recent years entered debates regarding the origins of Czechia’s exclusionary sentiments towards migrants and Muslims.

Some have pointed towards the power of the media in producing, perpetuating, challenging and transforming imagined boundaries of belonging between the ‘Self’ and ‘Other’. Indeed, the Czech media has played a powerful role in perpetuating myths about migrants and Muslims in Czech society. Others have pointed out that it might be precisely the lack of national sovereignty throughout most of Czechia’s history that explains why distrust of foreigners – and hence both migrants and Muslims – runs rampant in Czech society. From this perspective, Czech resistance to collective EU action on migration, as well as on other issues, has been perceived as an attempt to resist a new era of foreign control in the form of EU governance.

In reality, all of these interpretations – as well as many more not mentioned here - are likely to hold some semblance of truth. However, it is simply not possible to reduce societal patterns of discrimination to a single root cause, whether in Czech society or in any other across the globe. Taking into account this complexity, it is also crucial to remember that no national entity – nor the sentiments of its population – is entirely homogenous, despite rhetoric attempting to suggest otherwise. Indeed, many Czech citizens and civil society organisations have both criticised and taken action to combat the spread of anti-migrant and anti-Muslim sentiment in Czech society.

Nevertheless, the overwhelming presence of anti-migrant and anti-Muslim sentiment in Czech society remains a symbol of just how normalised beliefs in the non-belonging of migrants and Muslims have become across large swathes of European society, even in unexpected places. Moreover, Czechia serves as a striking reminder that the physical borders of the nation-state are mere manifestations of imagined - and often much more powerful - borders in society. It is due to the latter that many who cross physical borders find that once on the other side, they never really crossed at all.