Lithuania as a new country of immigration

Lithuania has faced problems of large international immigration since 2004 as a result of its joining the European Union. The largest number of immigrants come from Belarus, Ukraine, Moldova, and more recently from China and Turkey. This paper analyzes the current migration policy and discusses to what extent Lithuania is prepared to receive new immigrants.

The phenomenon of international migration is a new challenge for Lithuania. Lithuania has experienced large-scale emigration since the restoration of independence in 1990. Since joining the EU in 2004 it has become a “new” immigration destination, although emigration is still substantial.

This paper is based on the author’s research results carried out for the shadow report in the Centre of Ethnic Studies in Vilnius. The report entitled “New Immigrants in Estonia, Latvia and Lithuania” was later published by the Legal Information Centre of Human Rights in Tallinn in 2010[1].

International migration in Lithuania, as well as in other Baltic States, must be examined considering three distinct historical periods:

1990-2004 Migration flows after restoring independence and before joining the EU.

2004-2009 Migration flows after joining the EU and before the global economic crisis.

2009- Migration flows during the economic crisis.

This paper discusses only the last two periods and its aim is to analyze migration trends in Lithuania including the identification of problems that newly arriving immigrants face, it provides analysis of current policy tools which are used in addressing immigration and integration, migrants’ rights; and the public discourse on migration. The analysis is based on data from governmental institutions, treaties and other legal acts, newspaper articles and statistics.

Between 2003 and 2007 Lithuania experienced an increase in immigration as well as in emigration. The level of emigration has fluctuated over time, while the volume of immigration has been increasing steadily from one year to the next. Comparing the period from 2004 (when Lithuania joined the EU) to 2007, an increase in immigration is apparent: from 5553 new applications in 2004 to 8609 in 2007. The number of work permits issued [2]to foreigners increased sharply as well. Emigration flows increased as well in 2005 (compared with 2004) and decreased in 2006 (compared with 2005) only to rise again in 2007. Despite these fluctuations Lithuania has had a negative migration balance (4858 fewer immigrants than emigrants in 2006, in 2009 it was 13 900).[3]

Economic reasons continue to be dominant in both emigration and immigration patterns in Lithuania. The largest groups of foreigners coming to Lithuania are citizens of three CIS[4] countries: Belarus, Russia and Ukraine. Between 2006 and 2008 migrants arrived from 33 countries, mostly from the abovementioned countries, followed by Turkey and Moldova.

With Lithuania’s accession to the EU (2004) migration flows changed not only in numbers, but also in terms of countries of origin. Since 2004 an increase in numbers of immigrants from Turkey, China, and Moldova has been registered.

Immigration of males prevails in labour migration. The dominant age group of immigrants is the age category of between 15 and 59 years. 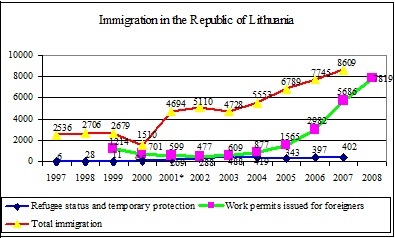 Note: No data on total immigration in 2008, including granted refugee status and temporary protection, is available to date.

Where do immigrants work?

The main document on migration policy is the Law of the Republic of Lithuania on the Legal Status of Aliens (which came into force on 29 April 2004), however there are other 11 key legal acts in migration policy, such as “The Strategy of Regulation of Economic Migration”.

A brief overview of the legal acts that regulate migration processes (including citizenship and visa policy) shows that the main legal basis of migration policy in Lithuania is now established.

For a long time there has been no unifying document regulating the objectives, purposes and actions of economic immigration to Lithuania. Lithuanian migration policy used to refer to the Law on the Legal Status of Aliens, the Strategy of Long-term Development and the Strategy of National Demographic Policy of Population.[5] After 2004, Lithuania substantially revised its law while accommodating the EU’s immigration policy. The main piece of legislation continues to be the Law on the Legal Status of Aliens, which has been substantially amended during the last few years.

Other objectives of the “Strategy of Regulation of Economic Migration” are: (1) to formulate long-term regulation measures of economic migration; (2) to regulate factors, which stimulate economic migration in order to ensure a match between labour force demand and supply; (3) to encourage workers from third countries and also to encourage the remigration process and give priority to EU citizens; (4) to maintain close relations with Lithuanians living abroad; (5) to ensure effective institutional cooperation regarding issues of economic migration.

The Strategy of Regulation of Economic Migration outlined the state’s preference to attract labour migrants from those countries that have similar social structure, culture and language to that of Lithuania. Belarus, Ukraine, Moldova or countries of the South Caucasus should be thus given certain preference.

Also, it is important to determine other priorities of Lithuanian migration policy that are being established by the Government of the Republic of Lithuania: (1) the promotion of circular migration; (2) combating irregular migration; 3) encouraging selective highly qualified labour migration; 4) supporting migrant integration, esp. through providing Lithuanian language courses; (5) promoting migration from neighbouring countries[6].

However, considering the effects of the current global economic crisis which became especially noticeable in early 2009, the patterns of labour migration as well as general trends of regular and irregular migration may change. Along with these changes, integration measures for newly arrived migrants may change as well. Regardless of the economic situation, employers are still interested in cheaper labour from abroad.

Recent labour migration to Lithuania has not yet been sufficiently analysed, although the public, the media and research institutions have become more interested recently.

As for integration policies, there are currently no specific integration measures applied. However, some initiatives in this area have been undertaken:

However the integration measures are directed only to refugees and those who have been granted temporary protection. In general, migration policy is directed towards return migration rather than to immigration policy and measures of migrant integration. This suggests that immigrants in Lithuania in 2004-2009 were considered as a means to satisfy labour force shortages as long-term integration aspirations were not considered. Currently there is no specific social insurance for immigrants; all immigrants are entitled to the same social insurance as Lithuanian citizens.

Most of the equal treatment measures apply for migrants in the same way as they apply for citizens and are defined by the following laws: The Labour Code, The Law on Public Service, The Penal Code, The Code of Administrative Offences, and by the Law on Legal Status of Aliens (Art. 3). The Law on Equal Opportunities enabled foreigners to issue complaints through the Office of Equal Opportunities Ombudsperson.

Specific forms of xenophobia and intolerance are expressed as individual commentaries on the Internet. They are very often addressed at ethnic minorities, but also towards immigrants.

As to civil and political rights, immigrants gain access to most of them only after becoming Lithuanian citizens. EU nationals are entitled to more rights (e.g. to vote in the European Parliament elections) than third country nationals.

The mass media play an essential role in the formation of public opinion towards immigrants and it influences immigrants’ social and cultural integration into the receiving society.

From 2005 to 2008 the Centre of Ethnic Studies at the Institute for Social Research undertook public opinion polls on public attitudes towards various social and ethnic groups. In 2008 respondents were asked to indicate groups they would not like to have as neighbours. 69% answered that they would not like to live with the Roma, 56% – with homosexuals, 48% – with Chechens, 45% - with Muslims, and 43% – with refugees (see graph below).

Another opinion poll, also carried out in 2008 by the Centre of Ethnic Studies suggested that public attitudes towards labour immigrants and labour immigration are unstable. On one side data has shown that more than 80% are in favour of equal rights for foreigners and Lithuanian nationals in labour relations, but on the other side – more than 60% believe that migrant workers can trigger social disorder. Almost 47% think that there are already enough foreign workers in Lithuania. These numbers show that Lithuanian society is not well informed about current processes of labour migration. For instance, people do not know whether labour migrants complement or replace the internal labour force, or what status labour migrants have in Lithuania. On the one hand, attitudes towards immigrants are negative, but on the other hand people envisage advantages from economic immigration.

In terms of the image of migrants in the Lithuanian mass media, there are three types of immigrants who are not treated in the same manner:

1. Immigrants from EU Member States (very often from Italy and the United Kingdom)

Mass media mostly reports on this group of immigrants in a positive way. [7] These immigrants seem to be integrated automatically into Lithuanian society and cultural life. Usually, the media speak about this category of immigrants using interviews where foreigners speak about the traditions of their countries and their personal experience in Lithuania, and compare the cultures in both countries.

This category of migrants is assessed in a neutral manner without very positive or negative assessments. The mass media does not demonstrate a strong interest in their culture. They are very often perceived as cheap labour of quite good quality, which is also supported by the fact that Lithuanian employers like to employ them. [8]

3. Immigrants from other third countries

This group is considered the most “exotic” and problematic by the media. This group consists of asylum seekers, refugees or more recently migrant workers. The mass media mostly discuss these immigrants in a mistrustful or openly fearful manner. Their image is very often full of stereotypes.

In general the Lithuanian mass media’s reporting on migration has the following features:

After 2009 the situation changed because of the global economic crisis. As predicted by A.Sipaviciene, the director of the Association of International Migration, in May 2008, the number of new immigrants has changed. Due to the steep increase in unemployment from 6% in January 2009 to 15% in May 2010, labour immigration has decreased. Although it is now too early to speak about the consequences of the economic crisis, some changes are noticeable:

In the case of general immigration into to Lithuania, one can make the following remarks:

Centre for Quality Assessment in Higher Education. Available at: http://www.skvc.lt/?id=0.

Communication from the Commission to the Council, the European Parliament, the European Economic and Social Committee and the Committee of Regions. Brussels COM (2007). Available at: http://ec.europa.eu/justice_home/fsj/immigration/docs/com_2007_512_en.pdf

Election rights to European Parliament. Available on password at: http://en.infolex.lt/scripts/sarasas2.dll?Tekstas=1&Id=122368.

Entzinger H. The social integration of immigrants in the European Union. Available at: http://www.jil.go.jp/event/symposium/sokuho/documents/20070117/Entzinger_e.pdf.

Law on election of City Municipality Council of the republic of Lithuania Available at: http://www.vilnius.lt/newvilniusweb/index.php/263/?env=110.

Law on social assurance of the republic of Lithuania. In Lithuanian available at: http://www3.lrs.lt/pls/inter3/dokpaieska.showdoc_l?p_id=1327

On foreigners work permit issues conditions and confirmation of procedure description. (24 April, 2006, No A1-118). Available at: http://www.ldb.lt/Informacija/PatarimaiDarbdaviams/Puslapiai/uzsienieciu_idarbinimas.aspx.

Order on social integration of asylum seekers confirmed by the Government of the Republic of Lithuania  (17 May 2001, No. 572). Available at http://www3.lrs.lt/owa-bin/owarepl/inter/owa/U0103863.doc

Principles on Migration Policy proposed by Ministry of Foreign affairs of the Republic of Lithuania. In Lithuanian available at: www.urm.lt.

Republic of Lithuania Law on the legal status of aliens. http://www3.lrs.lt/pls/inter3/dokpaieska.showdoc_l?p_id=243642

Resolution on confirmation of landmarks of Lithuanian migration policy. Available at: www.urm.lt.

Strategy on Regulation of economic migration. Available at: www.urm.lt.

[2] According to the Republic of Lithuania Law on the legal status of aliens, the foreigner can obtain a temporary residence permit on following conditions: 1) work; 2) studies; 3) family reunification; 4) scientific research; 5) other legal activities, ecc. http://www3.lrs.lt/pls/inter3/dokpaieska.showdoc_l?p_id=243642

[5] Republic of Lithuania Law on the Legal Status of Aliens. http://www3.lrs.lt/pls/inter3/dokpaieska.showdoc_l?p_id=243642

Ana Klementjeviene
The author is a PhD candidate at the Centre for Social Research in Vilnius. Her research interests are migration policy, gender studies, and identity in the context of the EU.
Ana Klementjeviene
Zdroj: migrationonline.cz
Téma: Labour Migration

“Each time you take a tram in Vilnius, you hear people speaking about migration.” An interview with Daiva Tereshchenko, a Lithuanian researcher focusing on the Lithuanian 4. 8. 10

Annual Overview of International Migration in Central and Eastern Europe - 2009 9. 3. 10

Annual Overview of International Migration in Central and Eastern Europe - 2008 20. 4. 09