Family reunification between the norm and helplessness

Family reunification has become a right of migrants quite recently, specifically, since this international norm was adopted as a civilizational achievement. Global mobility and the plurality of family forms as well as public opinion, which tends to favour restrictive migration and asylum policies, present new frameworks for reflection on the challenges and development of migrant family reunification. Existing empirical studies show that Slovenian public opinion is not in favour of the immigration of family members of migrants who already live in Slovenia.

When reflecting on migrations from the viewpoint of the right to family reunification, it is important to emphasize that it is undoubtedly a civilizational achievement, and that it requires us to act carefully, as does the concept’s development and its complementation in the dynamic context of contemporary international migrations. The social context indeed always reflects a specific point of reference in practice, which consistently facilitates the principle of family reunification, and perhaps allows for wider or merely minimal standards in the actual procedure of reunification of a separated family.

It is important to analytically know and understand the structures of modern migrations, i.e. to have answers to the complex global mobility in which separated families represent a certain segment. Why is our starting point that the global mobility processes define the specific right by which international law regulates the right of refugee families to live together? The answer is quite simple, though not necessarily less complex – the trends defining contemporary migrations undoubtedly changed around the turn of the century: globalization, diversification of migrations, increased migration trends, politicization, forms of transition and, last but certainly not least in importance, the feminization of migrations have established a new thematic framework for modern migrations (Castells and Miller, 2009). It is in this context that we have to look for both challenges and answers to the viewpoint set out above, that of family reunification, which diverse migration processes place on different sides of multiple borders – territorial, political, social, and mental delimitations.

There seems to be no end to borders yet. A second key point – besides the shifts in trends – are the shifts in the concept of family. At this point we will not analyze the conceptual emphases of the plurality of contemporary families, but we have to question to what extent family reunifications reflect the diversity of modern families. Changes are urgently needed in practice to include family forms which deviate from the traditional family, and this is an aspect which has not been given sufficient attention in the discourse. The concept of family certainly is the key issue, but an openness of definition is not only present at the point to which degree of kinship a family extends, i.e. a family entitled to reunification, but also at the point of equal treatment of all family forms.

Slovenia: family reunification and contemporary migration in the eyes of public opinion

Positioning Slovenia in contemporary migration trends, we see that public opinion favours segmented admission of immigrants, based both on their geographical origin and socio-economic background.

Rejection of immigrants is obvious where it involves people from the former Yugoslav republics – which constitute the majority immigrant population in Slovenia – and immigration from non-European countries, but with an important distinction: immigrants from Africa and the East (Asia, Russia, the former republics of the Soviet Union) meet with significantly higher rejection than immigrants from the pan-European world (including the Americas and Australia).

Concerning social status, public opinion favours immigration of elites (highly qualified workers and entrepreneurs) and ethnic Slovenes, but rejects refugees and asylum seekers. This dual categorization, differentiating between those “who work for us” or “invest in development” and those who might be seen as a “burden for the state/society”, came out as a result that is typical of the way the public usually categorizes migrants. However, these categories have deeper roots in contemporary migration policies, i.e. in the state’s and the European Union’s policing and migration management.

In the case of family reunification, the empirical data[1] reveal the existence of a kind of “intermediate category”: the family members of refugees and migrants find themselves in an area in between the categories from which we “expect” either economic benefits or social costs. Looking at the immigration of family members of migrants and refugees in Slovenia, the shares of respondents favouring restrictions and those keeping immigration at the present level are almost equal (44% – 'keep at the present level' and 42% – 'limit'). Looking at the immigration of family members of migrants who already live in Slovenia, the majority of respondents favour immigration at the same level (48%), while a minority is in favour of restrictions (38%). 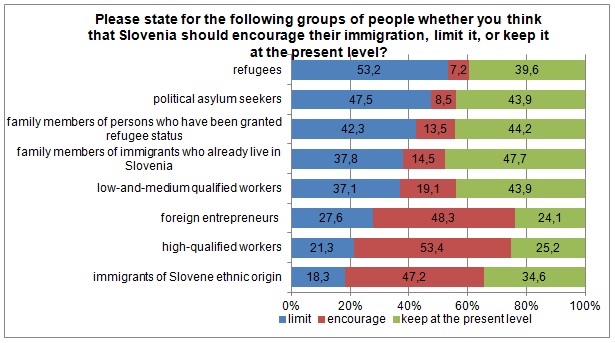 It appears that segmenting migrants based on their origin and expected social and economic benefits is slightly weaker or less pronounced when the family members of refugees and migrants are concerned. Public opinion is not in favour of family reunification, as is clearly indicated by the fact that only around 14% of respondents consider it necessary to “encourage” their immigration and consequently family reunification. Why is this share so low and why is public opinion so clearly against reunification? I think that the principal answers lie in the above-mentioned classification policies produced by government strategies of migration management, and these government regulations are then reflected in the public's opinions. The political discourse is reflected in the public's discourse and the two discourses are reduced to common meanings. Consequently, it is not surprising then that the political discourse dominates in the public’s naturally dispersed opinions.

Norms and helplessness: between an airport waiting room and legislative voting

One cannot expect people to be strongly in favour of immigration, immigrants and immigrant family reunification in a context where government policies are largely restrictive and tend to maintain minimal standards rather than to enhance them. The relationship between the norm adopted by government policies and the helplessness that is the overwhelming feeling of a separated family is the front line for the hopes of a mother waiting for her child at an airport after a long family reunification procedure, if the child has not managed to cross any of the borders. Support groups of activists and NGOs, as well as migrant communities, are important actors who contribute to the humane processes of family reunification at all levels – local, national, and global ones. This opportunity should be taken into consideration also in the context of amending the legislation on aliens[2] in Slovenia; the process that is currently under way (so far in the initial phase – at the level of the Ministry of the Interior) provides an opportunity for the norm to be set in a joint effort and for a norm that will not reflect people's helplessness in migrant family reunification.

The article has been written as part of the project Migration to the Centre supported by the by the Europe for Citizens Programme of the European Union and the International Visegrad Fund.

This article reflects the views only of the author, and the Commission cannot be held responsible for any use which may be made of the information contained therein.

Simona Zavratnik
Dr. Simona Zavratnik is Assistant Professor at the Faculty of Social Sciences, University of Ljubljana, and a researcher of migrations and human rights with the faculty’s Centre for Spatial Sociology.
Simona Zavratnik
Zdroj: migrationonline.cz
Téma: Family reunification Gender and Migration
Země: Slovenia
Projekt: Migration to the Centre

Public debate: Migrations and the right to family reunification 27. 6. 13

An overview of the migration policies and trends - Slovenia 7. 2. 13