Discrimination at universities? Not necessarily

The number of students at Czech universities is steadily on the rise, but not all of these students are of Czech origin. In 2001, the share of foreign students among graduates was 1.9%, but in 2010 their share constituted 7.6%. Russian can commonly be heard within the walls of university campuses, you can see groups of Vietnamese students clustered around benches, and it is quite possible that your neighbour in the residence hall is a Slovak.

Entering university marks a moment of considerable importance in most of our lives. We are anxious and full of curiosity. Are the professors morose old men? Will I make friends at uni? What if I end up sitting on my own in the canteen? How does the credit system work? Now try to imagine that you study abroad. There are several more things you may worry about added to the list of the usual ones. Will I get laughed at for my accent? Will I be able to understand everything the lecturers talk about? Will I be treated as an equal?

An easier way = a better way?

The fears of ridicule, the language barrier, or xenophobic attitudes are among the common nightmares of foreign students. Some of their worries may be eased when they walk into the classroom and spot one of their compatriots among all the Czechs. Trying to become friends with them means avoiding the possibility of encountering a language barrier or xenophobic behaviour. It is therefore becoming much more common for students of a particular nationality to stick together in closed sub-communities existing within a larger community.

For example, Danča H. (a student of the Vietnamese origin) said: “The Vietnamese tend to stay in touch with each other much more and it is more long-term. I don’t usually arrange to go to lectures together with the Czechs – they don’t really show much interest most of the time anyway, so that makes it easier.” Hoang D. (a student of the Vietnamese origin) said: “On top of that, you can meet most Vietnamese people outside of school as well as at various Vietnamese events and so on.” Pavel Duba, from the Association for Integration and Migration, added: “We have also noticed this phenomenon. Young people group together on the basis of other characteristics such as shared interests, gender, or mutual personal appeal as well, however, forming groups based on shared linguistic and cultural background is relatively common.”

The advantage of these cliques is the similarity of their members’ position, which often leads to greater understanding, the possibility of studying in their mother tongue, and a sense of solidarity.

Is voluntary segregation a good solution? Anastasia B. (originally from Russia) said: “Unfortunately, I have more friends from countries other than the Czech Republic, most of them are Russian. I am afraid of the language barrier, so that’s why my attempts to talk to Czechs hardly result in forming friendships – we are merely acquaintances.”

It makes no difference where they’re from

More intense communication between Czech students and other nationalities would teach both sides mutual respect, and there would be no separation into national groups at universities – only the divide between students and lecturers would remain. Matěj Š. (a Czech student) confirmed: “I perceive everybody in the same way, it makes no difference where they’re from. Of course, I have noticed they form their own homogeneous groups. I am not sure whether I would approach them – probably only if I knew somebody personally.”

Of course, the point is not trying to prevent friendships forming among students of the same nationality, because such behaviour is entirely normal and natural. It would be fantastic, however, if our foreign students stopped needlessly worrying about not being Czech. It would be great if they walked into the classroom without automatically searching for their fellow nationals. After all, we’re all equal. 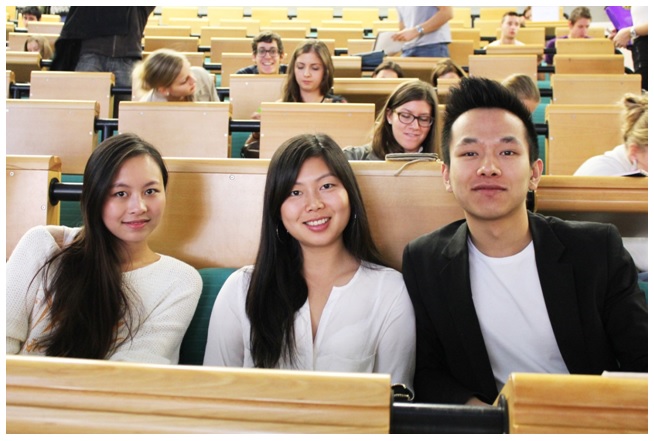