Abdirahman Abdi, a 23-year old Somali man, student at St. Elizabeth University: I came to Slovakia in July2009 with my family. Together with my nine family members I ran away from inhumane conditions, poverty and illiteracy in Somalia. 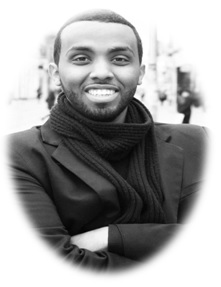 My journey started with curiosity for discovering a new country that I had not heard of. It all started when my father first left Somalia searching for appropriate place where we can live. He came to Slovakia in 2006 and immediately began looking for a job and starting the process of reuniting with his family. The process took two years and eventually we moved to Slovakia.

I was forced to leave my beloved country for many reasons such as civil wars, destroyed facilities, killing of innocent people. Leaving the country was not easy for me, neither for my family, but situation back there was extremely dangerous and insufficient for living. The only solution was to leave the country. So we did.

We arrived in Slovakia in July 2009. I feared the unknown. New country, new people, and new environment. But I remained optimistic. After a few weeks process of applying for asylum and then finishing all the paperwork, I immediately enrolled in a Slovak language course and after its completion I found a job. I was interested in the ways of living in Europe and the differences between Somalia and Europe. I made friends and went out with them. People here are helpful and helped me all the time. As a result, I get along very well with the community here.

Since I became a volunteer for UNICEF, I have been going on trips all around Slovakia visiting different schools, doing projects and showing children and teenagers life in Somalia and other African countries. We have also organized campaigns to collect money for children in Africa and we tried hard so that children there will have a better future. Furthermore, after I learned the language, I became an interpreter for the Ministry of Interior of the Slovak Republic. Currently I am working at the Asylum Center for about 150 Somali emigrants.

Being accepted to a university was an important breakthrough in my journey. Education was the main reason why my father decided to leave the country and he would always say that education was the key of life. So achieving this goal was a true success in my life and also in the life of my family. Admittedly, I had chosen a university where I can do more and where I can get a lot of important information for what I want to do in my life. Now I am completing my Bachelor’s degree and I am putting all my effort into it so that I end with good marks. After that my ambition is to earn a Master’s degree.

For several years I had known I wanted to go to university in Europe. I applied to several universities in Slovakia. There was one university which offered an excellent program and I wanted to get accepted to that one. I read out the admission letter to myself and believed I would be accepted to the university. A few weeks later I got an email saying that my application was successful. I was so thankful and grateful, as deep down I had believed I would get into the school I wanted.

After that, I faced some challenges. However, I believed I was already a student of Health & Social Sciences at St. Elizabeth University in Bratislava, Slovakia. And I came to live in Bratislava. I would do things like talk to friends about my university. These little things really helped me believe that I was already studying.

There seems to be a mounting interest in learning another language. As a Somali native, I realized that I actually did not understand most of what's going on in the classroom because my listening skills weren’t good enough. From time to time it was hard for me to understand the lecturer. Many lecturers try to make their talk clearer by adding a lot of subordinate clauses to their sentences. This can be very confusing. One thing I noticed is that most of the lecturers have a tendency to speed up their talking. Some lecturers try to make the text on their PowerPoint slides as short as possible, often using uncommon words. They also tend to use the same word multiple times, which can be very annoying if you don’t know the meaning of the word. As of today, all the challenges have disappeared on their own as I paid no attention to them and didn't harp on them. I was always positive and remained positive and happy as I knew this was the key to manifest what I wanted. 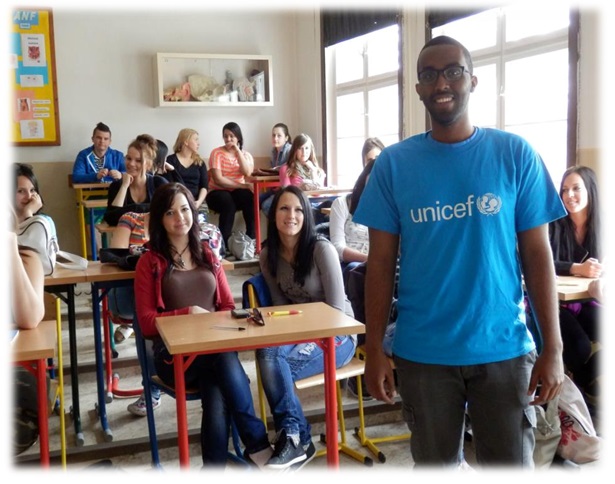 This article is one of the migrants’ contributions to the project Migration to the Centre and was created with the cooperation of the Human Rights League, Slovakia.

The article has been written with support of the Europe for Citizens Programme of the European Union and the International Visegrad Fund. The article reflects the views only of the author, and the European Commission cannot be held responsible for any use which may be made of the information contained therein.